WEDDING LIMOUSINES
WEDDING CARS
VINTAGE WEDDING CARS
​This stunning rare Phantom is finished in old English white with contrasting cream leather interior, polished walnut door and interior cappings, plus blue Wilton carpets. Don’t confuse it with other similar lookalike kit cars.
​The Imperial Viscount will comfortably seat seven adult passengers in comfort and can if required cover multiple trips for the bridal party and bride before the service. We have two of these stunning identical cars available.
​​opportunities either at the  church or reception venue. The interior is matching with full cream leather interior with navy blue piping and navy Wilton carpets. With this cars stunning looks and appearance, it is the perfect choice for any bride on her wedding day.
​Or finished in metallic champagne silver gold. The interior boasts full ivory cream leather interior piped in red with matching red Wilton carpets with ivory piping.
Both have a retractable rear roof for a perfect photo shoot opportunity.
These cars have been specifically designed for weddings with easy access to the rear doors and have ample space for up to seven passengers. This is, in fact, our view of the perfect wedding car for the groomsmen or bridesmaids.

​A discount is offered if both the Bramwith and the Badsworth are booked as a pair of cars. We have some mid-week special prices on these cars and viewing is highly recommended to appreciate this stunning pair of cars. 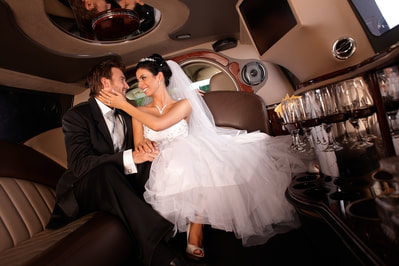 Congratulations and all the very best whichever your final decision may be!
No matter how far in advance your unique day is, simply fill in the form on the right-hand side for a ‘No Hassle Guaranteed’ FREE quote. Sheffield Limousine Service prides itself in offering the most Luxurious Limos at affordable prices. Or get on the phone today on 0114 303 1540 and talk to one of our friendly, helpful staff. It’ll put your mind at ease. ​Also, ask for information on our special wedding car packages, for which we are always offering special offers.